[size=18pt]Kisses allowed? Sarah Harding cosies up to a lucky man… but he’s not her boyfriend[/size]
If Sarah Harding’s boyfriend Tom Crane has a jealous streak, he might do well to avert his eyes now.
The Girls Aloud pop star was spotted cosying up to a mystery man at Manchester’s Hilton hotel over the weekend.
Wearing a form-fitting scarlet frock and towering peep toe heels, the singer leaned in for a warm embrace and what appeared to be a kisses with her handsome companion.

Of course, it may simply be the flirtatious 26-year-old putting her playful side on show.
Sarah and her DJ boyfriend began dating a year ago after she split from her journalist boyfriend Joe Mott.
The now live together in the singer’s £1 million flat in London’s Camden and have already discussed the prospect of marriage and children.

Sarah, who revealed Tom has promised to propose to her in Venice when the time is right, has said: ‘We have talked about children. Tommy wants loads. More than I think I can pop out!’
The notorious party-girl also says the pair plan to build their own home in the country.
She has said: ‘We’ve got plans to move out and build our own place. There’s some land we’ve got our eye on.
‘I want to be out in the country, riding horses, sitting by a big log fire and being a home bod.’
Sarah and her Girls Aloud band mates have just wrapped up their Tangled Up UK tour with an emotional final performance in Birmingham last night. 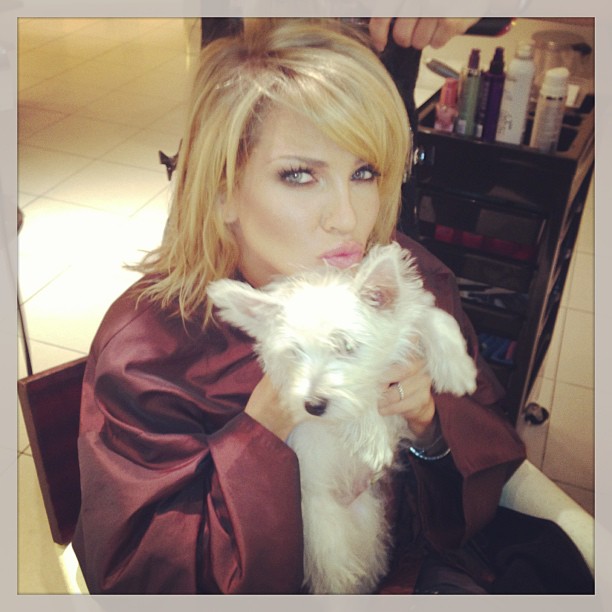