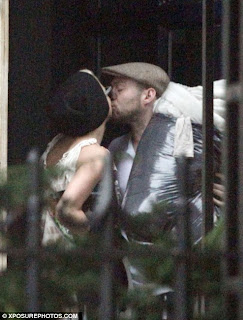 Sarah Harding fuels rumours that she is back with her ex as the pair are spotted kissing outside her home
Only a fortnight ago she said she’d given up on men for good, but it seems that Girls Aloud star Sarah Harding has had a change of heart as she was pictured kissing her on-off boyfriend Tom Crane today.
The pair – who have been seen together several times since their split last month – looked very much an item as they visited a vet’s surgery in North London.
They then headed back to Sarah’s home together and shared a lingering kiss on the doorstep before the 28-year-old drove off.

Tom and Sarah ended their year-long relationship last month. The DJ later blamed their split on the pressures of work, complaining that Sarah’s pop star schedule meant the two spent hardly any time together.
Sarah recently denied that the pair had rekindled their romance, insisting that she was single, even joking that she was considering becoming a lesbian.
‘I don’t really want to talk about men at the moment. I’m really fed up with all of them. I think I might become a lesbian.’
The 26-year-old also revealed that she was moving out of her £1million Camden home because it has ‘too many bad memories’.
‘It’s all just getting too much for me to handle over here. I have photographers outside my house every day,’ she said.
‘So what I’ve decided is that I’m going to sell up my home and just escape abroad
‘I’m thinking of seeing the world, you know travelling for a bit just to reflect and clear my head. But I’m not going to do that just yet,’ she added.
http://www.dailymail.co.uk/tvshowbiz/article-1034731/Sarah-Harding-fuels-rumours-ex-pair-spotted-kissing-outside-home.html
Send to Facebook