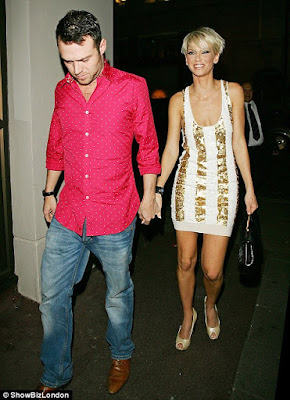 Here’s another scientific theory that’s been debunked.
Boffins recently revealed that it’s vertical stripes rather than horizontal – going across the body – that make people look bigger, but clearly this isn’t the case with stick-thin Sarah Harding.
The Girls Aloud star was pictured outside Nobu Berkeley in London’s Mayfair in a skimpy, sequinned, stripy body-con dress that looked like an elongated vest.But it certainly didn’t add any of the curves the singer is lacking, as she still looked rail thin and ready for the catwalk.
Sarah stepped out into the warm September evening in the barely there minidress, which revealed a distinct lack of bust as the singer looked thinner than ever.She left the restaurant hand in hand with boyfriend DJ Tom Crane, who certainly looked please to be in the company of his glamorous girlfriend.Last week Harding revealed that she was hurt and offended by comments that she was the ‘slapper of the band’.Especially, she claimed, because she had never even had a one-night stand.She said she was now looking to settle down with Crane and hoped to marry him and have his children.