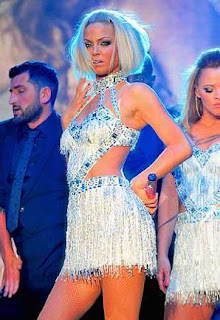 NOT content with being a chart-topping pop princess and one of the 100 sexiest women in the world, Stockport’s Sarah Harding has added another string to her bow.
The Bramhall beauty – who with the rest of her Girls Aloud bandmates kicked off their ‘Out of Control’ tour with a homecoming show in Manchester MEN Arena at Friday night – is to star in a new BBC drama.
The 27-year-old will play a beautician alongside ‘Mamma Mia’ star Dominic Cooper in ‘Freefall’, a drama about the credit crunch by BAFTA winning film-maker, Dominic Savage.
It wlll be the second time that Stockport’s first lady of pop will get in front of the camera after a brief cameo in British Independent film ‘Bad Day’ last year and her mum, Marie, said the former Hazel Grove High School pupil enjoyed the filming.
She said: “Sarah loves it, she is very interested in it and possibly at the end of the day when Girls Aloud has run its course it is something she could go into.”
Last week the Brit award winner had more reason to celebrate as she was voted 87th in mens magazine FHM’s 100 sexiest women in the world 2009 – with bandmate Cheryl Cole taking the top honours.
And it seemed Sarah may have been suffering from a bout of opening night nerves when she took to the stage at the MEN.
“To start in my home town is a real honour and I’m struggling to hold it together,” said Sarah.
Her mum joined the thousands of screaming fans who welcomed Sarah back to the north west and she said the girls put on a fantastic show.
“It was superb,” added Marie. “The crowd were standing up through the whole show cheering. Sarah loves coming back home, she’s just not back enough.”