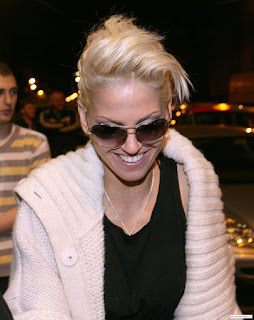 The blonde bombshell, best known for her sultry voice and sexy dance moves with her girl group, has recently taken on several screen roles.’I like Angelina Jolie characters, where she plays like the action lady,’ the 27-year-old said. ‘I love cars, I’m bit of a tomboy, so I could definitely see myself doing something like that.’ Harding trained in acting as a child and appeared with her bandmates in the St Trinian’s film starring Colin Firth, Rupert Everett and Gemma Arterton in 2007.Next up she will star in the gritty BBC drama Freefall with Mamma Mia! heartthrob Dominic Cooper.But the feisty singer still has her feet on the ground – she won’t be hanging up her microphone.’I still love my singing, so don’t want to quit that completely. It’s time to have a bit of a change and utilise some other skills. It keeps it interesting. We do need a break from it, otherwise it gets very tedious,’ she added.’I could definitely see myself doing something like a comedy, or a psychological thriller – I don’t know. As long as it’s baby steps, I’m not rushing into it. It’s one step at a time.’As well as a Hollywood career, Harding is also said to be planning a wedding to DJ squeeze Tom Crane later this year.But he might like to know Harding doesn’t only have her sights on Jolie’s career – she fancies her boyfriend, too. She told Manchester’s Key 103 radio station: ‘I’ve still got a bit of a thing for Brad Pitt.’
article
Send to Facebook

Sarah Harding to model at LFW advert
Racy lady: Sarah Harding goes for a spin in a foxy see-through dress
A message from the girls