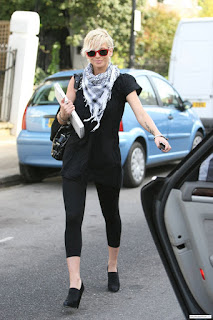 SARAH HARDING’s bid for solo success has had a massive boost – the talent agency of RICHARD GERE, PRINCE, SYLVESTER STALLONE, DENZEL WASHINGTON and MEL GIBSON are keen to snap her up.While GIRLS ALOUD bandmates CHERYL COLE and NADINE COYLE plan their own assaults on the charts, the hard-partying blonde is keener to indulge her acting ambitions.She has already landed a part in BBC2 drama Freefall, which will be aired next month.And now that the mighty William Morris Agency have an interest in representing her, Sarah’s chances of triumph on both sides of the Atlantic have risen dramatically. TalentI’m told: “Talent bosses at WMA New York have been keeping a close eye on Sarah recently and are interested in chatting to her once the band’s current tour finishes.“They have seen her and DOMINIC COOPER in Freefall and think she has something special. Dominic has also praised Sarah’s acting talent to friends in New York who also have close links with WMA there.“They are keen to chat about possible theatre work too.” Freefall sees Sarah opposite Mamma Mia! star Dominic in a tense drama about the social fallout from the credit crunch.Her record-breaking Brit girl group are taking a rest as soon as their Out Of Control tour finishes in Newcastle on June 6.They will regroup in September to support COLDPLAY at Wembley Stadium but intend to spend most of the rest of 2009 and 2010 apart.The William Morris Agency is one of the oldest and most powerful brands in the global entertainment business, having been founded in 1898.Not only do they represent a glittering roll call of Hollywood actors, musical heavy-hitters such as EMINEM and BRITNEY SPEARS are on their books too.Just imagine. In the not-too-distant future there could be on Oscar sitting next to Sarah’s Brit Award on her mantelpiece.
http://www.thesun.co.uk/sol/homepage/showbiz/bizarre/article2420040.ece
Send to Facebook