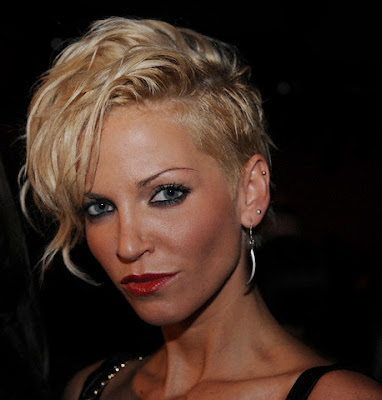 The faux leather dress, the fierce red platform stilettos, the side-shaved hair do – Sarah Harding was the essence of punk as she attended Vivienne Westwood‘s London Fashion Week show. It was a look the designer – who was pivotal to the fashion side of the Seventies punk movement – would no doubt approved of. Girls Aloud beauty Sarah was just one of several stars at the British style maven’s catwalk presentation. Joining the blonde beauty was her bandmate Nicola Roberts, dressed in an eye-catching scarlet gown. Also in the front row were former Spice Girl Geri Halliwell and her handsome financier beau Henry Beckwith, MTV presenter Alexa Chung, and Lady Victoria Hervey. And fresh from attending New York Fashion Week, Peaches Geldof was there to support sister Pixie. Bob Geldof‘s 19-year-old daughter joined Daisy Lowe in helping model Vivienne’s latest collection for her red label. The new line, which Vivienne revealed was designed to capture the timeless quality of summertime in England contained several Fifties-inspired dresses as well as sharply tailored jackets and wide leg pants.
http://fashionweek.hellomagazine.com/london-2010-spring-summer/news/20090921244/vivienne/westwood/girls-aloud/1/
Send to Facebook