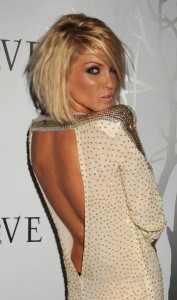 The Girls Aloud singer, who opened the Polynesian-themed London hotspot last November with DJ boyfriend Tom Crane and co-owners Nick House and Piers Adam, is up for Best Bar against Leslie Ash and husband Lee Chapman’s bar Juju, Mahiki, McQueen and Aquum in the London Club And Bar Awards.

“Sarah Harding and Kanaloa combined are a force to be reckoned with, regardless of the fact they are so new to the scene – however, they are up against some of the best in the business with institutions and landmarks such as Mahiki, Harvey Nichols and Juju in the Best Bar category,” said spokesperson Charlie Mason-Parson.

Kanaloa has become one of the most popular bars in the capital, with celebrities such as Zac Efron, Sugababes and JLS hanging out there.

The winners of the awards will be announced on June 7 in London.