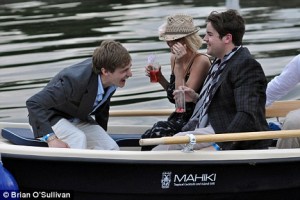 The Girls Aloud caner was given such VIP treatment at the Henley Royal Regatta, she ended up being responsible for single-handedly holding up one of the boat races by 20 minutes.

The sexy singer, 28, was helicoptered in by Mayfair club Mahiki to inject some much-needed edgy glamour to the normally stuffy event in Oxfordshire.

Mahiki, who were hosting a tent at the annual boat-fest, chartered a chopper for its special guests and laid on a chauffeur-driven river boat to escort them to their secluded area, where the club laid on a party.

As Sarah meandered down the river in her swanky boat, everyone looked on, amazed that Regatta officials had decided to hold back one of the races for nearly half a hour so the sexpot could get to her drinking platform.

One onlooker told us: “It was a pretty hilarious sight. Sarah Harding was cruising down the river with a bunch of pals drinking wine and cocktails, waving at everyone who was staring.

“She looked like she was having a right laugh with her mates and was totally unaware that everyone was waiting for the next race to start.

“There were toffs everywhere impatient for Sarah to pass. It was very amusing. She’s so down to earth and normal, she had no idea.”

The blonde minx spent the day relaxing on the boat drinking Gallo Rositos – cocktails made with rosé wine. She was with London socialite Michael Evans and they watched the races together.

Our well-placed mole revealed: “Sarah was suppose to arrive in between the races. That way she could jump on a boat down to the VIP area without getting in the way.

“But she was late and ended up arriving moments before a race was due to start.

“The Mahiki party looked like the wildest bash on the river, with a glamorous BBQ lunch and raised VIP areas with plasma screens showing Wimbledon.

“Sarah was with her boyfriend Tom Crane, who was DJing, and The Hoosiers.

“The last thing anyone expected to see at the Henley Regatta was an indie rock band knocking back bottles of rosé wine.

“At one point Danyl Johnson from last year’s X Factor tried to get in her VIP area but was turned away. He looked pretty gutted.”