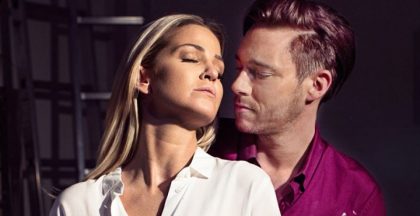 The new production of the musical starring pop star Sarah and former Hollyoaks star Andy Moss has faced its share of criticism since debuting in London earlier this year.

But Stockport-raised Sarah and Denton-born Andy are hoping that now they’re on home turf in Manchester, they will get a warm northern welcome from the audiences here.

The duo are both excited to be back home for the performances this week at the Palace Theatre of the musical, based on the hit 1980s movie starring Demi Moore and Patrick Swayze, and which had its world premiere in Manchester back in 2011.
Sarah says: “I never thought in a million years I’d do a full on lead role in a musical, but anyone who knows me knows I like a challenge and I like to push myself above and beyond.

“I thought it could help improve my acting skills, and I’m singing solo a lot more than I have done before and it’s also great to tread the boards. It’s an iconic film that I love, I’m very honoured to do it.

“It’s also really nice to show a different side to me, a softer side of me. People think of me as the blonde loud lairy one from Girls Aloud, but that’s not me when I go home at the end of the night, that was a persona I was given in the band and I did play up to it quite a lot but that’s not me 24/7.”
Sarah says she preferred not to read comments about the early performances of the show, saying: “I choose not to engage in the negativity because at the end of the day this is what we’re doing, this is what we love doing, if you want to come and see it, come and see it and see if we can prove you wrong.”

Co-star Andy adds: “Obviously opening in London is different to opening anywhere else in the country. What we found was that most of the people commenting hadn’t even been to see the show. It was a weird experience because I’ve never had such negative stuff before, but it was just a small pocket of people who didn’t want the show to succeed, or were annoyed about people off the telly being cast in these roles.

“What we found is that at the end of each performance we know we’ve done a good job because the house is full and the crowd is applauding – and in Cardiff last week we were getting standing ovations.”
It’s certainly an emotional drama for the two – who play the star-crossed lovers Molly and Sam – including that very famous pottery wheel scene.

And they admit there will be extra emotion with so many family and friends cheering them on in Manchester this week.

Sarah says: “Manchester is our home and we want to do our families proud.”