A STORY on 3 April stated that Sarah Harding from Girls Aloud had “romped” with Ed Sheeran’s cousin Jethro and had a “romance” while they planned her pop comeback.

This story is incorrect and Ms Harding and Jethro are in fact merely friends and are not involved together romantically in any way.

They spent time together working on song material and other plans and no more. We are happy to set the record straight and apologise for any difficulty caused. 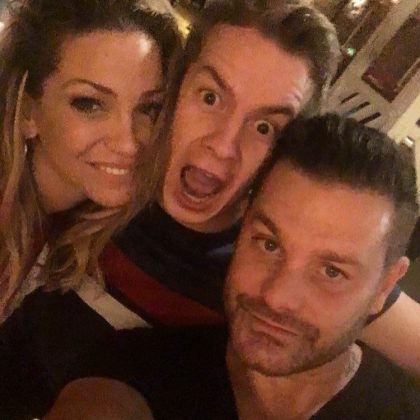 Sarah Harding has written six songs with Jethro Sheeran that reflect the “light and dark” moments of her life.

The 35-year-old singer – who recently starred in the touring production of ‘Ghost: The Musical’ – has been working on new solo material to reflect her transition from being a young pop in chart-topping group Girls Aloud to the woman she is today.

And Sarah has been in the studio with rumoured romantic interest Jethro – the cousin of Ed Sheeran who is known in the music industry as ‘Alonestar’ – and the pair have created several tracks together for her potential LP and he has been very impressed with her talents in the studio.

Speaking exclusively to BANG Showbiz, Jethro, 31, spilled: “Yeah me and Sarah have written three songs together. It’s about being the underdog. The passion she has for music, the situation she’s been in and just the darkness. This Isoface Light I call it – an equal amount of light and dark and we both kind of seem to do [experience] that. A lighthouse, as the ship [approaches] it has an equal amount of light and dark, so it’s called an Isophase Light. So that’s kind of the whole thing, it’s three tracks, where we’ve actually done six but three we want to work on. Three were dark and three were light.”

Girls Aloud took a break in 2009 with each of the five members – Sarah, Cheryl, Nadine Coyle, Kimberley Walsh and Nicola Roberts – choosing to use the hiatus to explore solo ventures.

Sarah kick-started her acting career, appearing in ‘Bad Day’, BBC film ‘Freefall, Run for Your Wife’ and ‘St. Trinian’s 2: The Legend of Fritton’s Gold’ for which she wrote three solo songs to the film’s soundtrack.

In 2011, she checked in to rehab to be treated for depression and alcohol and prescription drug abuse before reuniting with Girls Aloud in 2012 to celebrate their tenth anniversary together before the band split for good in early 2013.

Jethro insists Sarah’s many life experiences are shaping her new sound and, in particular, her deeply personal lyrics.

He said: “It’s all character building that’s why I like her. She’s real and that’s what I like in an artist and when she sings it she balls it out and the words really come from within. If I wrote any old pop throwaway song, it wouldn’t be believable.

“She’s kinda done that with Girls Aloud and so now it’s going to be music about her, what she represents and how she’s grown into a woman. She really does love music – she plays guitar, she DJs, she is involved in production, she knows her harmonies and music and she’s a really lovely girl. Us being so close recently has just come out the wrong way.”

Earlier this week, it was reported that the pair had a brief fling but Jethro has confirmed they are “just friends” now.

He said: “I can’t take the romance rumours seriously. Sarah said, ‘Just laugh it off’. I spoke to her before this interview and it’s nobody’s business. We’re just friends. That’s it.”

Jethro and the ‘Love Machine’ hitmaker first met around three years ago on a Jason Vale health retreat in Portugal and immediately hit it off.

He said: “I was there for two weeks and we just met there. We kept in touch on-and-off then I had a song that I thought she would be great on and she came down to record the vocals.”

Four months ago Sarah laid down her vocals on a chillstep cover of Cyndi Lauper’s 1983 smash hit ‘Time After Time’ which he’s very pleased with and plans to release.

And the blonde beauty is set to feature in Jethro’s upcoming video for his new single ‘Lovelorn’ which was written about an ex-girlfriend.

The “hedonist, sexy, dark” track features the live band members of Massive Attack and tells the story of a heartbroken woman who falls in love, but the lust of her life doesn’t love her back.

Jethro admits the video shoot had been delayed but teased: “Sarah’s going to look really beautiful and elegant. She’s going to be in a white ball gown but in a very organic backdrop – in the woods out in the country near Glastonbury – so it’s going to be muddy and we’ve got two interpretive dancers who are going to be wearing leotards.”

Also featuring on the chorus is ‘Pop Idol’ top 10 singer Rosie Ribbons whose vocals sit on an addictive resonating drum beat recorded by Damon Reece, with production by Jethro and Angelo Bruschini.

‘Lovelorn’ is out now via iTunes.