The PJs and nightshirt are on Primarks website, you can’t order online but you can check the stock in your local Primark

These PJs are a stargazers dream! Made from comfy cotton, this long sleeve pyjama set features a button through shirt and wide-leg trousers with an elasticated waistband and drawstring ties. We love the all-over starry night print and the baby pink piping, as well as the thoughtful quote featured on the back, stating that ‘the darkest nights produce the brightest stars’, which we think finishes them off beautifully. They’re a wintery night essential we wouldn’t be without. Time to relax in ultimate comfort.

This product is part of an exclusive two-piece pyjama range, available in the UK and Ireland. Dedicated to the memory of Sarah Harding, 50% of the sales from these products will go to the charities, Cancer Research UK and The Christie Charitable Fund. Proceeds will raise awareness, and fund research and support services for those affected by cancer. 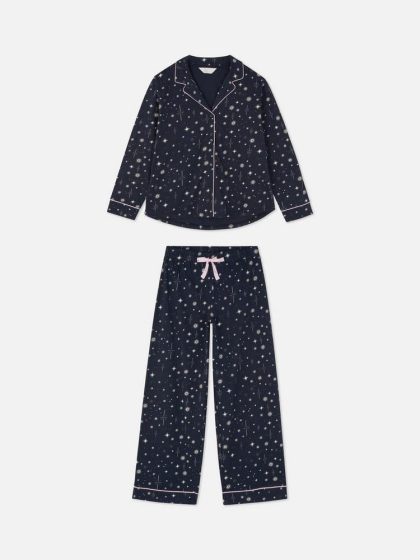 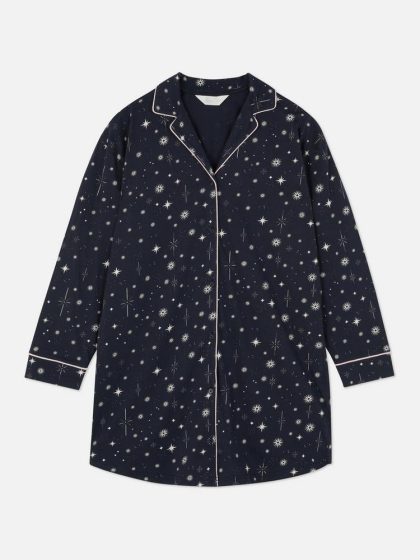 Cheryl said: “Before Sarah passed away, we promised her we would fulfil her wish of raising money for vital research to help determine young women between the ages of 29 and 40 who could be at risk of breast cancer with no genetic history. This campaign with Primark will raise a significant amount of money to help us achieve our promise to her.”

Kimberley added: “It feels really emotional the four of us coming together to honour Sarah’s fundraising wishes. We really hope we can do her proud and raise as much money as possible. As well as raising funds, Cheryl, Nadine, Nicola and myself will continue to do everything we can to help raise awareness and encourage people to have regular check-ups.”

Nadine said: “We’re grateful to Primark for this opportunity and for all the money they will be donating in Sarah’s name. Sarah would have loved this nightwear range so much and we hope the Girls Aloud fans will too. We miss Sarah every day and we’ve come together to support this crucial cause because it will always be something close to all of our hearts.”

Lastly, Nicola expressed: “The overwhelming donation from Primark has meant we are well on our way to achieving our promise to Sarah. We feel a sense of responsibility to honour her wish to raise money that could prevent other women finding themselves in the terrifying situation she was in. To take on this baton is nothing short of a privilege. We really hope everyone loves the nightwear collection and will join us in raising as much money as possible.”

Sizes range from XS to XL and retail between £14 to £18, which is a bargain! So head down to your nearest UK and Republic of Ireland Primark stores from Sunday, 1 October, and grab yourself a new set of pyjamas for the long winter months ahead while also spending your hard-earned cash on a good cause.

50% of proceeds from the Primark collaboration will go to supporting Cancer Research UK and The Christie Charitable Fund for Sarah Harding. A minimum commitment of £500,000 will be given in equal portions to these charities to support funding Dr Sacha Howell’s vital research project at Sarah’s request.

Dr Sacha Howell, Sarah’s doctor, said: “Sarah spoke to me many times about breast cancer research and was keen for more to be done to find out why some young women are diagnosed when they have no other family members affected by the disease. We want to find out why young women in their 30s like Sarah might develop breast cancer so we can more accurately identify people with a higher risk and improve their chances of survival.”

That’s not all, as Primark will also donate £100,000 to Breast Cancer Now in the UK as part of the broader Breast Cancer Awareness campaign. At the same time, in Ireland, the budget high street retailer will support The Irish Cancer Society, with 50% of sales of the Girls Aloud nightwear being donated and a €50,000 donation to The Irish Cancer Society to help fund cancer awareness, services, and research.

Taken from THIS Article 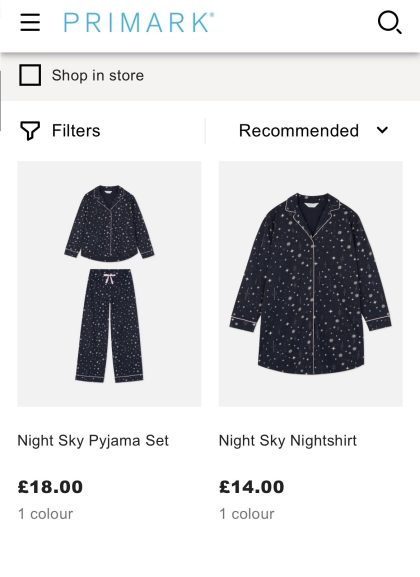 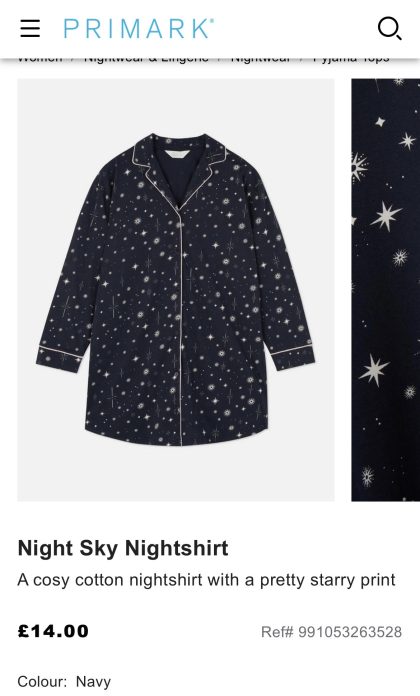 Primark have a range of nightwear in memory of Sarah, 50% of the sales from these products will go to the charities Cancer Research and The Christie Charitable Fund

SATURDAY 8 OCTOBER AT THE LONDONER HOTEL

A fundraising initiative for The Christie NHS Foundation Trust and Cancer Research UK, as part of The Sarah Harding Breast Cancer Appeal, it is set to be a night of the finest hospitality and entertainment in aid of life-saving cancer research.

Hosted by Cheryl, Kimberley, Nadine and Nicola, the evening will be presented by Fearne Cotton with confirmed performances by Olly Alexander, Ricky Wilson (Kaiser Chiefs) and Chrissie Hynde. A live auction will be hosted by Johnny Gould – with lots including an original canvas depicting Sarah Harding by The Connor Brothers.

Named The Primrose Ball after Sarah’s iconic line, ‘here I am walking Primrose’ from the number one Girls Aloud song ‘The Promise’, The Sarah Harding Breast Cancer Appeal will fund ground breaking research to identify new ways to predict which young women, with no family history of breast cancer, are likely to develop the disease, ensuring women like Sarah can be identified earlier on when treatment is more likely to be successful. The Primrose Ball charity gala event was at the request of Sarah and is a project that was very close to her heart.

“We are so grateful to The Londoner for hosting The Primrose Ball at their wonderful hotel. Charles Oak, Hotel Director of The Londoner and Sarah, had a very special bond and holding her gala evening there will make the night even more special. Our hope is to raise a huge amount of money that will hopefully prevent other people finding themselves in the same terrifying situation Sarah found herself in.” Cheryl, Kimberley, Nadine and Nicola.

All proceeds will go to The Christie NHS Foundation Trust and Cancer Research UK on behalf of The Sarah Harding Breast Cancer Appeal.

Simon Jones has posted on his Instagram stories this morning about The Primrose Ball in memory of Sarah taking place in London on the 8th October, to raise money for The Christie Fund, a charity very close to Sarah and her family 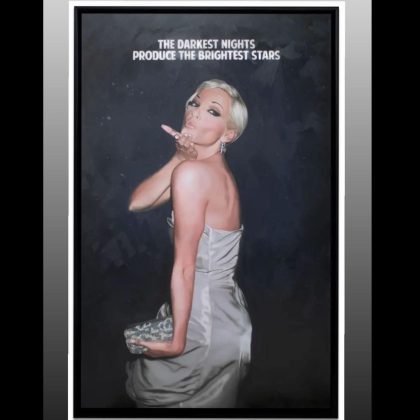 Sarah has released some remixes of Wear It Like A Crown, done by Gareth Shortland You can buy from iTunes and Amazon

You can stream on Spotify and Apple Music

We were asked to add something to Sarah’s new book Hear Me Out, here is whar we added. This was an absolutely MASSIVE honour to do and something we are so grateful for. Sarah we love you more than words can say. For the past 5 years we’ve raised money for charity for Sarah’s birthday, this year we thought we’d raise money for Breast Cancer Care.

Breast Cancer Care are the only specialist UK-wide charity providing support for anyone affected by breast cancer.

What Breast Cancer Care do

We combine the personal experiences of people affected by breast cancer with clinical expertise, using this in a unique way to:

We focus our work on the unique experience of each individual affected by breast cancer.

We involve people with breast cancer in all that we do.

We use our understanding of the emotional and practical issues facing
people affected by breast cancer alongside our clinical expertise.

During the early part of 2014 we revisited our 10-year strategy and
refreshed it to bring new energy and focus for everyone working with or
for us.

During 2010 we consulted with a range of people – including our
users, breast care nurses, our volunteers, staff and trustees – to draw
up plans for how we should work in the coming decade.

As a result, we are concentrating our efforts in seven key areas of
impact. We believe this will help us make a life-changing difference to
even more people affected by breast cancer. Sarah Harding came face to face with homeless kittens and cats as she teamed up with Blue Cross to launch the national pet charity’s Paws for Tea campaign.

The Girls Aloud singer is calling on animal lovers everywhere to host a tea party with friends and family in aid of Blue Cross after visiting the charity’s rehoming centre in Lewknor, Oxfordshire.

This year Blue Cross is aiming to raise £70,000 with its Paws for Tea campaign which calls on people to host tea parties in their homes or offices. All money raised from the campaign will support the tens of thousands of sick, injured and abandoned dogs, cats, small animals and horses Blue Cross helps every year through its rehoming centres and animal hospitals across the country.

During her visit to Blue Cross Lewknor, Sarah met five-week-old kittens Sage and Salsa. The kittens were born at the rehoming centre earlier this year after their mother Mouse was brought in heavily pregnant.

The Celebrity Big Brother 2017 winner also met Italian greyhound Gino who was rehomed by Blue Cross in 2015. The five year old regularly returns to the rehoming centre to act as an ambassador dog – a role which sees him provide canine support to other dogs who may be nervous in their new surroundings or unsure of being around other dogs.
Sarah, who has dogs and cats of her own, said: “My pets are like my best friends and I just couldn’t be without them. After meeting some of the beautiful cats and dogs needing homes at Blue Cross’ Lewknor centre, I’m so proud to be supporting the charity and really hope I can encourage lots of animal lovers to take part in the Blue Cross Paws for Tea campaign.”

“It’s so simple – just get together with your friends or family over a nice brew and a slice of something tasty. You’ll not only have a lovely time, but the money you raise will help Blue Cross change the lives of pets all over the country. Go on, pop the kettle on for these wonderful pets!

“I remember growing up we always had Battenberg cake in the house, which was brilliant, but I think my all-time favourite remains butterfly cakes because I just love the buttercream icing – I could literally just eat that all day and I would be happy!”
Celebrity chef Ainsley Harriott has also shared his recipe for Spiced Pumpkin Cake with Coconut Custard for this year’s campaign.

In 2017, Blue Cross helped 40,000 sick and injured pets through its rehoming centres and animal hospitals across the country. The pet charity also provides a range of other free services including a Pet Bereavement Support Service and education visits to schools, colleges and youth groups.

Heather Collin, Blue Cross Community and Events Regional Manager, said: “We’re so excited to have Sarah on board supporting our Paws for Tea campaign this year.

“Blue Cross helps tens of thousands of pets every year and it’s events like Paws for Tea which raise the vital funds to make that possible as being a charity we receive no Government funding.

“This year we’re hoping to raise £70,000 – with every penny going towards helping animals coming through the doors of our rehoming centres and animal hospitals across the country every day.”
To sign up for a free Paws for Tea fundraising pack, full of ideas and recipes including Ainsley’s; posters; balloons and a collection box visit www.bluecross.org.uk/paws-tea or call 08444 993 663.

Credit to www.bluecross.org.uk for the article and pictures